The secret behind Mint success story

Mint is one of those startups that falls into the category of successful stories. It is a free software available in Canada and USA, which deals with your personal finance. How many of you are currently having trouble saving money? I am positive that you’ve been postponing that trip to Paris for way too long.

The idea behind Mint

Mint was not a viral product, instead Mint success story is based on a real problem, that we all encounter, and that is: saving money. With all the taxes, bills, credit and debit cards that we have, combined with an overly stressful job, it is hard to keep track of what we spend on a day to day basis.

Aaron Patzer is the man who developed this personal finance service. He launched Mint in September 2007, and it managed to have about half a million users in only one year. In 2009, Intuit bought Mint for $170 million.

How Mint managed to turn into a success story

At first, Mint created a blog, which focused on personal finance. Their main goal with this blog was to target the young professionals. They felt that they were being left out. Soon, the blog became #1 among personal finance, and it also managed to get traffic to the app, which didn’t have a viral potential.

Also, they used a very cool trick. At the end of every article, they wrote: “Hey! Mint is a cool thing and is launching. Give us your email and we will notify you of the next revolution in personal finance”. That alone helped them collect 20.000 e-mail addresses. This is another great example that shows the fact that great content can be in the favor of your business.

An SEO strategy is another thing that helped Mint become a success story. Along with the blog, landing pages were also an important part of this strategy. Interaction on social media (Twitter and Facebook) made a difference, too. People love infographics and Mint made some educational ones. This drew people’s interest and managed to get them shared, especially on Reddit. On the blog, people also shared their success story with mint.com.

“Trust is an emotional thing”

Users had to give Mint their financial info, so the company had to built trust in this relationship. In order to gain users’ trust, Mint made sure that the words “bank level data security” were highlighted on the website. A highly secured website and an easy and short name helped at gaining trust, too.

We usually tend to trust people or products/services that have easy to pronounce name. Though most of the people that he pitched the idea to said it was a bad idea, because of the trust issue, he somehow managed to intrigue Josh Kopelman. What made the difference was the fact that he had a running software which he was able show him.

In an interview, Aaron Patzer says that “Trust is, at its core, kind of an emotional thing. If you’re walking down a dark alley and you see a person ahead of you, you have a reaction based on appearance, demeanor. Websites have the same thing — a personality, an appearance”. He also stated that in the early days, he managed to spread the word about Mint only by word of mouth and press.  Aaron’s advice for entrepreneurs is to solve a problem with their product or service they’re launching.

What do you think about Mint success story? Would you use this personal finance service? P.S.: Did you know that Mint comes from Money INTelligence?

Writing is my passion. Lover of great food. Anything with avocado sounds good to me. 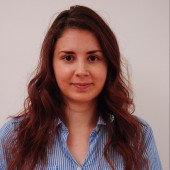 Writing is my passion. Lover of great food. Anything with avocado sounds good to me.

Why Do People Want to See Active Social Media Accounts for Your Start-up?

How to Intensify Your Content Marketing for Improved Results

How to Improve Visual Content Marketing for Your Business

Get your copy of the Digital Marketing Playbook and discover a curated collection of proven digital marketing hacks and case studies. Get inspired!